The Chief is the head of overall prison security and is an imperative necessity for your prison's stability and basic operation. He is arguably the second most important administrative staff member in Prison Architect. You can only hire one chief and requires an office.

Unlocked by researching Security in the Bureaucracy tree, and provides the player with a real-time prison danger report. This reveals a generalized view of your prison threat level and whether a potential riot could occur depending on certain factors. He is able to unlock several security related research which are fundamental for your prison.

Chief in a console Achievement Icon 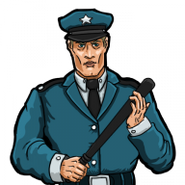