Doctors are medical professionals who are responsible for the treatment of the sick and injured. Unlocked by researching Health through Bureaucracy by a Warden.

All doctors operate out of an infirmary. If an entity becomes injured, supposing they're still conscious, they will automatically travel to a nearby infirmary where a doctor will tend to them.

Infirmaries often deal with a lot of "traffic" as they see many an injured prisoner - especially after outbreaks of violence. Doctors, like any other entity, are susceptible to injury. It is for this reason that it is wise to station a guard in an infirmary.

Entities who are knocked unconscious, and thus cannot physically escort themselves to an infirmary, may be escorted by doctors. Said doctors will place the unconscious body on a medical bed where they will then proceed to treat them. If escorted into infirmary by a guard, the guard and will wait there until they are treated.

Handcuffed prisoners must be escorted back to their Cell after treatment, if not cuffed, they will leave by themselves after treatment if a path is available.

Doctors can also heal prisoners who may have overdosed on drugs/narcotics, heal sick prisoners infected with a virus and provide treatment for starving or bleeding prisoners.

Note that doctors cannot heal injured Guard Dogs. Guard Dogs must recover by sleeping in a dog crate in a kennel. 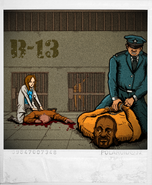