Add topic
watch 02:56
Doctor Strange in The Multiverse o Madness - The Loop
Do you like this video?
Play Sound

The Execution room is the final location where a prisoner on Death Row will be executed in accordance with their sentence. Executions have to be unlocked by Death Row research of the Lawyer. The method of execution utilized in Prison Architect is the Electric Chair.

The Execution chamber is not visible at all in the Rooms menu before unlocked, and Death row inmates will not appear in your intake log if they have no death row cells to live in.

Prisoners who are issued with death sentences are segregated in a unique prison population colloquially referred to as death row. Prisoners on death row are given black prisoner uniforms.

Death row inmates lead very different prison lives compared to other types of prisoner. For instance, death row inmates live out their sentences in the confines of their cell. They do not respond to your regime. The execution chamber is exclusive to death row inmates and cannot be used for any other prisoner category or entity.

After scheduling a prisoner's execution, the legal process will begin and the game will alert you with the text "EXECUTION UNDERWAY", including a tab displaying the next steps of the death protocol. These final steps are outlined below.

After a prisoner is executed, a guard escorts their body to a hearse and are then taken away.

If prisoner is found innocent after the execution, the player will be fined $50,000. This will also cause all other Death Row prisoners to be transferred to another prison by transport, and intake queue is reset for Death Row prisoners. If this happens two times, the Failure Condition of Wrongful Executions will be activated immediately.

If the prisoner is found guilty, the player will be awarded $10,000.

The Clemency chance, found in the prisoner's grading or in the Todo list, dictates how likely a Death Row inmate will turn out to be innocent. 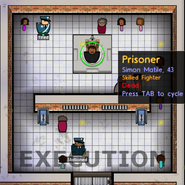