Guards are the primary and most important security staff available to hire. They have the largest workload out of all the staff available in game and they hold the most responsibility when it comes to keeping prisoners in check and keeping the peace in your prison.

If a guard is killed or knocked unconscious, baton, jail keys and taser (if they have one) will be dropped to the ground, becoming collectable by prisoners.

Unlike most other staff, guards are up-gradable through security via the bureaucracy menu. The Chief is the administrator responsible for the researching of guard tactics, effective policing and security equipment.

Researching deployment unlocks its corresponding tab in the main toolbar. It allows the player to manually assign guards to all the sectors of your prison, and specify which sectors should be prioritized over others.

Researching Micromanagement has been researched by the Warden, the deployment view can also be used to schedule when guards patrol/are stationed in those sectors.

Researching patrols unlocks the patrols sub-tab in the deployment tab. It allows the player to manually draw out specific routes around crucial areas of your facility. For example, having a guard patrol around the perimeters of your walls could deter prisoners from picking up contraband thrown over the prison walls.

Researching the Taser Rollout program extends the use of the tasers to normal guards instead of just the Armed Guards. This program teaches standard guards how to use the tasers. The Chief will run these programs in a classroom. After a successful lesson, the guard will become certified and acquire a taser from the armoury to use. 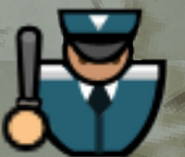 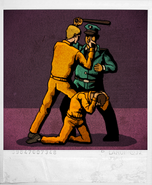