Edit
watch 01:40
The Sandman Will Keep You Awake - The Loop
Do you like this video?
Play Sound

Guard Dogs are highly useful animal entities with unique skills which aid overall prison security. As previously implied, they are the only animal entity in Prison Architect besides the dogs used in Animal Therapy. They co-exist with, and are managed by Dog Handlers.

These entities cannot be hired independently and will only spawn when a dog handler is hired. The Chief is the administrator responsible for researching and unlocking the guard dogs.

Guard Dogs are naturally gifted with a powerful nose, which is useful in the detection of scented, or smelly, contraband. These include: Poison, drugs, medicine and cigs.

Guard dogs will automatically and instantly sniff any prisoners that walk past them in close proximity. This is highlighted by a small brown dog icon that will pop up on the prisoner entity.

If a dog smells one of the above contraband on a prisoner, it will initiate a search of that prisoner to occur. This search will either be conducted by the dog handler or a nearby guard.

Escape Tunnels are also something that guard dogs are extremely useful in detecting. If a guard dog walks over ground where, underneath, an escape tunnel has been dug, the dog itself will start digging. In this case, a small yellow flag will mark where an escape tunnel may be.

Furthermore, if a guard dog walks over an escape tunnel, where a prisoner is underneath and actively digging, the guard dog will burrow and fork out the escaping prisoner from beneath.

Guard Dogs are extremely fast creatures. Prisoners attempting to escape on foot will almost definitely be caught and mauled by a guard dog before they are able to reach freedom.

As of "The Glasshouse" update there are now a total of 8 different breeds of dogs that you can choose from. They are listed below. 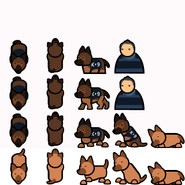