Where your dogs live.

Kennels are the Rooms in which Dog Crates are placed for a Dog Handler's Guard Dog.

You need a Dog Crate for each dog that wants to sleep, but not all of them will be sleeping at once. Which means you can get away with having fewer dog crates than your total number of dogs (since some will be out on patrol ~ this is in contrast to armed guards, each of which needs an individual locker). If you have too many dogs wanting to sleep and not enough dog crates, the team will stand in the kennel doing nothing.

When a dog gets tired he must rest in a dog crate before the team will continue patrolling. Placing dog Bowls in the kennel and near the patrol paths will increase the dogs stamina by a small amount. If injured, dogs will heal when resting in the kennel. 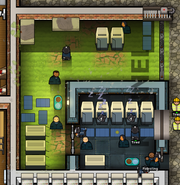