Parole is a unique reform program which allows the possibility for prisoners, often those with softer offenses, to be released earlier than their intended detention time.

In order to be arranged, you must first construct the parole room according to its requirements, then activate the program via the programs tab in reports.

During a hearing, a prisoner will be assessed by the following officials:

These officials both arrive at your facility on foot and will leave after the hearing concludes.

At the end of the hearing, it is the parole officer who has the final say on whether the prisoner qualifies for early release or not. This decision is solely based on the prisoner's estimated re-offending chance. This can be viewed via the grading section on any prisoner's rap sheet. This percentage must be lower than the parole cutoff which is outlined by the player in the policy tab. For example, if a player sets the parole cutoff at 15%, only inmates who have a re-offending chance 15 or lower will be granted parole.

The player can freely increase or decrease the parole cutoff. However, making a parole board too lenient will result in penalties and fines if the inmates are prematurely released and still go on to re-offend.

The parole room is not only used for parole hearings. If your facility accommodates death row inmates, each inmate will be given a chance to appeal for clemency. Appeal Hearings work in a similar way to normal parole hearings, but instead are hosted by:

Each death row inmate, instead of having re-offending chances, have chances of clemency. This is, in other words, the chance that they will be saved from legal execution. Naturally, a death row inmate would want this chance to be very high - but this chance is reduced by half every single time they fail an appeal, or is increased if they pass.

Unlike parole cutoffs, the player cannot manipulate the appeals cutoff. Instead, they must go by the legal, national execution liability standard which is set at a default 5%. Prisoners must not be executed if their percentage is higher than 5%. This standard can be increased to 10% by a Lawyer.

Players can, however, dictate how many appeals a death row inmate gets. It is wise to allow for an inmate to receive as many appeals as possible. The more appeals the player allows for a prisoner, the more certain they can be of his/her guilt in which case, they can confidently execute said prisoner without fear of penalty.

If a death row inmate is executed and is later found to have been innocent of the crime or crimes they were previously convicted of, you will be heavily fined. If failure conditions are enabled, 3 innocent executed inmates will result in termination. 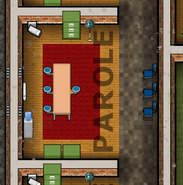 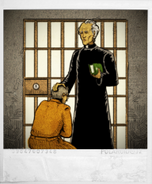