Showers are rooms where prisoners will go whenever permitted to by regime, in order to wash themselves under a shower head and satisfy their hygiene needs. Prisoners will head to the closest shower room available.

The provision of an area to wash is fundamental, but the shower room specifically is not. In other words, a single shower head could be fitted into every cell for each prisoner, and the need for a shower room would be eliminated.

It is vital that you dedicate at least one hour of your regime to shower time, else your prisoners will begin to complain and could potentially cause trouble in response.

Each shower head will need to be provided with a water supply so it can function correctly. As of recent updates, the player also has the option to provide hot water for the shower heads (so long as the weather & temperature map setting is enabled) which will give the sector +10 points to its grade.

The water used by prisoners to shower will need to be disposed of properly using drains. Drains should be installed at any and all entrances/exits to your shower room. If water is allowed to spread freely without being drained, it will: 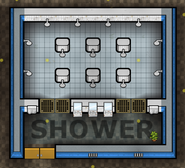