Snipers are highly trained security staff, responsible for keeping the most troublesome prisoners in line and denying prisoners their escape in the last few feet to freedom. They oversee the outdoor areas of your prison from the confines of Guard Towers.

They are equipped with sniper rifles, obtained in the Armoury, which are capable of immediately rendering a target unconscious or even killing them in a single shot.

Prisoners misbehaving in the sight of a sniper will be targeted. This can be seen as a red beam (laser sight) which will focus on the targeted prisoner. The sniper will then fire several warning shots in order to force the prisoners to stop and surrender.

A sniper will eventually resort to shooting the target directly if they do not cease their misconduct.

There are several circumstances in which a sniper will not fire warning shots and instead engage the target immediately. Situations in which this would be the case include:

If a sniper does not have a sniper rifle on hand, they will engage in hand-to-hand combat with misbehaving prisoners.

Now that through Bureaucracy the player can research Non-Lethal Sniper, snipers will not kill whoever they fire at. They will only use live ammunition if Freefire is enabled. Non-Lethal Sniper will, at a maximum, render victims unconscious. Very useful for volatile prisoners who like fighting.

A major perk with using snipers is the suppression effect that they emit through their sheer presence, whether they are armed or not. The suppression effect is spread to all prisoners within a 30 tile radius (not including the tile occupied by the sniper). As such, they are useful for repressing unrest which, in turn, reduces the likelihood of a riot occurring.

The influence of the suppression effect is limited to outdoors. It cannot influence prisoners indoors.

Snipers on the ground can shoot much faster and a single sniper can easily incapacitate a team of misbehaving prisoners which arguably makes them even more effective than armed guards. However, unlike armed guards, snipers cannot be stationed indoors or be assigned to patrols.

Snipers who aren't stationed in Guard Towers will most likely idle around your security rooms or armouries until a job becomes available. Snipers do not conduct the same day-to-day tasks that standard guards perform, e.g. opening doors, operating CCTV monitors, etc.

If there are no armouries in your prison, snipers may still station themselves within Guard Towers but cannot shoot. However, their presence alone will still emit the suppression status effect. 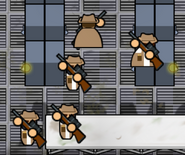