Workmen are essential staff members responsible for, but not limited to, construction and reconstruction of your prison and all objects within. You are automatically provided with eight workmen which arrive on a supply truck when creating a new prison. Workmen will idle in storage rooms, delivery and garbage areas

Workmen will create buildings by first placing brick or concrete foundations and can fill said buildings with objects at the discretion of the player. If trees are in the way of any building zones, Workmen will first cut them down before continuing to build.

NOTE: Outdoor areas such as yards do not require foundation.

Workmen will carry out various other duties which include but are not limited to:

Workmen cannot carry out tasks if they are trapped or stuck in any way. Likewise, workmen will not carry out tasks in an area where danger is present. Such as areas where prisoners are fighting or fires. If a workman for either of the two aforementioned reasons does not/cannot conduct a task, a red X will appear on the target build. Hovering your mouse over the red X will show a small display detailing:

Certain jobs can be prioritized over other jobs by hovering the player's mouse over the task and pressing CTRL + Left Click. This will usually cause a nearby workman to immediately drop what they are doing, and complete the prioritized task.

Workmen do not carry jail keys and as such, guards are needed to open the routes towards Jail Door protected areas. Door Servos can prove to be helpful in allowing workmen to quickly access areas protected with these door types. You can enable "Allow staff keys" in policy. 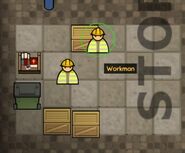